Good Morning. This is Dave Zinn with the Gallatin National Forest Avalanche Forecast on Wednesday, January 27th at 7:30 a.m. Today's forecast is sponsored by Blitz Motorsports and Yamaha and Gallatin County Search and Rescue. This forecast does not apply to operating ski areas.

Mountain temperatures are in the single digits to low teens F with 15-25 mph winds from the southwest and there is 1" of new snow in the mountains around West Yellowstone.

Today, temperatures will be in the upper teens to mid-20s F. West Yellowstone will receive 5-7" of new snow and Cooke City will receive an inch. The rest of the advisory area will get the associated 15-25 mph winds from the south to southwest. Snow will move north Friday night into Saturday.

The mountain snowpack from Lionhead through the Bridger Range is shallow with two distinct weak layers. The first is a thick layer of weak, sugary snow near the ground. This layer is nearly universal and has caused many avalanches this season, most recently a snowmobile-triggered avalanche in the Taylor Fork (2020-21 avalanche activity list, Taylor Fork details). It will take weeks or months to fully trust this layer of depth hoar, but it is adjusting to the current load and avalanches are less likely. The second is a thin layer of feathery surface hoar buried 6-18" deep. This layer is not everywhere and we have seen variations in its reactivity. During recent field days, Alex and I found it very reactive at Bacon Rind and in some areas of the Taylor Fork (Bacon Rind video, Taylor Fork video). We will watch this layer to see if it begins causing more problems in the future.

Stability in these ranges is currently similar, but today's snowfall will heavily favor the mountains around West Yellowstone. Stability will decrease as the snow adds up. Watch for new avalanche activity and shooting cracks and listen for "whumphing" as clear signs to retreat from steep slopes. Get your shovel out and perform an extended column test if you don't observe these obvious signs of instability.

Today, travel in and around steep terrain requires a conservative mindset, careful route-finding and thorough snowpack assessment. Human-trigger avalanches are possible and the danger is rated MODERATE.

The challenge in Cooke City is that many slopes are stable while some have one or two buried weak layers. The first is a recently problematic layer of surface hoar buried 12-18" deep and the second is a more dormant layer of sugary facets buried 2-3' deep. Last weekend, snowmobilers triggered three avalanches near Sheep Mountain and skiers saw shooting cracks and hear loud whumphs. Learn more by watching Doug's new video and looking at the photos from Cooke City (Huckleberry photo, Miller Ridge photo, Sheep Mountain photo, shooting cracks photo). Both weak layers are adjusting to their current load and, while avalanches remain possible, they are becoming less likely.

Variability between slopes requires riders and skiers to be attentive to changes in conditions, to plan routes carefully and to regularly search for signs of instability as a reason to back out of steep terrain. The danger is rated MODERATE. 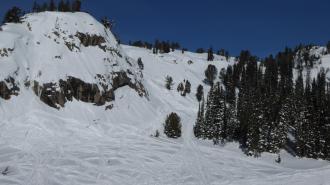 A snowmobiler triggered this slide to the east of Huckleberry Lake. It likely failed on 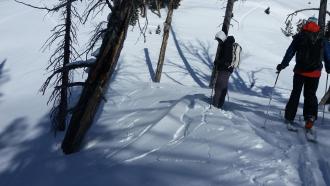 Skiers near Meridian Peak observed cracking in the snowpack. It appeared to be the wind-drifted 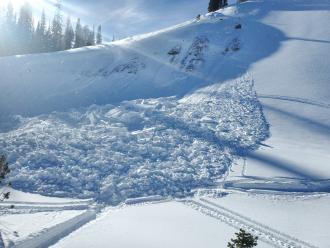 A snowmobiler was side-hilling a slope in Sunlight Basin and triggered an avalanche. The rider