Good Morning. This is Alex Marienthal with the Gallatin National Forest Avalanche Forecast on Sunday, January 10th at 7:15 a.m. This forecast is sponsored by Montana State Parks and Uphill Pursuits. This forecast does not apply to operating ski areas.

This morning there is no new snow. Wind is west-southwest at 5-15 mph with gusts to 25 mph, and temperatures are teens F. Today, wind will be westerly at 10-20 mph and shift north this afternoon, and temperatures will reach mid to high 20s F. The next chance for snow is Tuesday night and Wednesday.

In the Bridger Range, Madison Range, southern Gallatin Range and Lionhead area near West Yellowstone large avalanches are easy to trigger, breaking on a thick layer of weak, sugary snow on the ground. The mountains have not received snow since Thursday, but the last two days avalanches and collapses continued to be triggered from lower angle terrain, and propagated long distances.

Yesterday, skiers reported large collapses in the northern Madison Range (details) and near Hebgen Lake (details), and a sledder reported wide propagating cracks and an avalanche at Buck Ridge (photo, photo). On Friday, a skier triggered an avalanche remotely (from a distance) in Cinnamon Creek (details). Large collapses were reported in the northern Madison and Bridger Ranges including some cracks breaking 300 ft from the trigger point (details, details). Ian and I rode into Buck Ridge where we saw 9 human triggered and natural avalanches that broke since Tuesday. One of them was triggered on Thursday afternoon and broke 2 ft deep and 1000 ft wide (video, photo).

Avalanches can be triggered from low angle terrain connected to steep slopes. Recent activity broke wide, across terrain features into multiple starting zones. Avoid riding on and underneath steep slopes. Today, human triggered avalanches are likely and the avalanche danger is CONSIDERABLE.

Yesterday in Hyalite a skier triggered a very large avalanche on Flanders Mountain. It broke when he was at the bottom of the lowest angle side of the run (30-33 degrees). The slide was 2 feet deep where it took out the skier's tracks, and propagated across the whole path around a corner into an adjacent path where the crown was 6 feet deep (video of the slide, photos and details). In the northern Gallatin Range the snowpack has a similar poor structure as surrounding ranges, but less recent snow allowed the snowpack to become less reactive. The avalanche on Flanders, and reports of unstable test results (photo) and collapsing on Mt. Blackmore (details) are signs that it is possible to trigger large avalanches. Today the avalanche danger is MODERATE.

On Friday a group of six skiers triggered an avalanche on The Fin near Cooke City. Three were caught and partially buried, and one was evacuated by helicopter due to serious injuries (photos and details). West of Cooke City a separate skier triggered an avalanche which broke 2 feet deep, and he skied off without incident (details). Yesterday, riders north of Cooke City reported two avalanches that broke a similar depth as those on Friday (photo and details), and skiers triggered a small slab low on Republic Mountain (photo). Some slopes near Cooke City have an unstable recipe with a weak layer buried under recent snow. This structure is not on all slopes, so it requires us to be diligent with careful snowpack assessment, cautious terrain selection and safe travel protocols. Today, avalanches are possible and avalanche danger is MODERATE.

Monday, January 11, 6-7 p.m. The Friends of the Avalanche Center will offer a FREE 1-hr Avalanche Awareness Talk in partnership with Uphill Pursuits. The talk will be given via a live ZOOM session. Please click the link below to join the webinar: Join HERE.

Tuesday, January 19, 6-7 p.m. The Friends of the Avalanche Center will offer a FREE 1-hr Avalanche Awareness Talk in partnership with the University of Montana Western School of Outreach. The talk will be a live, ONLINE event. Join us HERE.

On Friday, a snowboarder died in an avalanche near Park City, Utah. The rider was not carrying any rescue gear. Our thoughts are with those affected by this tragic accident. A preliminary report is here. 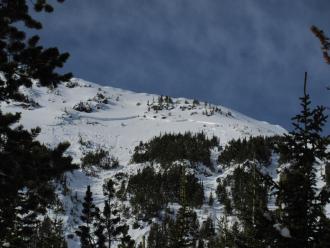 Skiers triggered this avalanche on Flanders Mountain on 1/9/21. It was triggered out of the 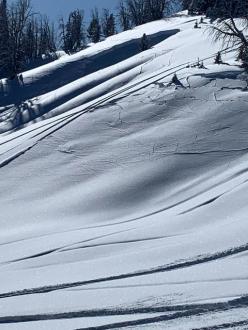 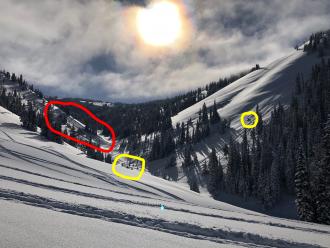 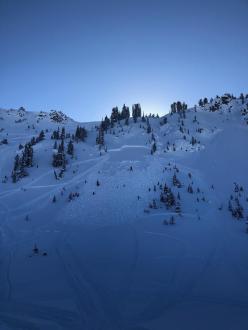 From email:"We suspect this happened fresh today (1/9/21), we  wonder if those animal tracks coming 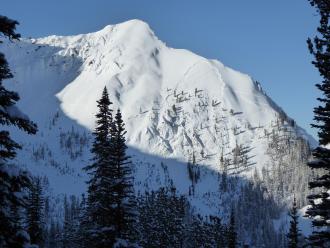 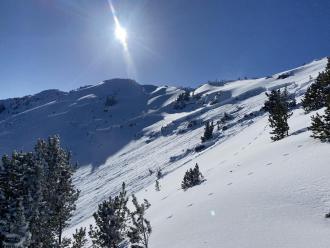 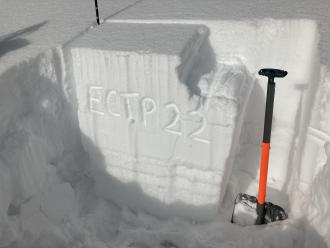