Good Morning. This is Alex Marienthal with the Gallatin National Forest Avalanche Forecast on Sunday, December 27th at 7:15 a.m. This forecast is sponsored by Stronghold Fabrication and Knoff Group Real Estate. This forecast does not apply to operating ski areas.

Since yesterday morning the mountains got 6-9” of snow near Bozeman and Big Sky with 3-5” near West Yellowstone and Cooke City. This morning temperatures are in the teens F and wind is west-northwest at 5-15 mph with gusts to 25 mph, and gusts to 40 mph in the Bridger Range. Today temperatures will be teens to low 20s F with west-northwest wind at 10-25 mph. Skies will clear later this morning with a couple days of cold, clear weather to start the week. The next chance for snow is late Wednesday.

Near Bozeman and Big Sky, dangerous avalanche conditions exist due to 6-9” of new snow adding 0.5” of snow water equivalent (SWE) to a weak snowpack. A 1-2 foot thick layer of weak, sugary facets on the ground avalanched and collapsed under the weight of new snow earlier this week (photo), and today’s new snow makes similar avalanches likely.

On Friday, a skier in the Bridger Range triggered a large slide on the Football Field path of Saddle Peak (photos and details), and a skier in Hyalite triggered a large, rumbling collapse on a low angle slope (details). Yesterday, Ian and I went to the northern Bridger Range and found a snowpack similar to what exists in Hyalite, near Big Sky and West Yellowstone, with a thick layer of weak facets on the ground (video).

Today’s new snow creates dangerous avalanche conditions on steep slopes, especially where thicker drifts of snow formed from west-northwest wind. The snowpack this year holds some of the weakest snow we have seen, and has shown it can’t be trusted. Careful terrain selection is your best defense. Today the avalanche danger is CONSIDERABLE.

The snowpack in the southern Madison Range and Lionhead area near West Yellowstone has a similar poor structure as the mountains near Bozeman and Big Sky, and they received 3-4” of snow equal to 0.3-0.4” of SWE. It is possible to trigger avalanches on sugary persistent weak layers 1-3 feet deep. Last weekend, Dave and I saw avalanches and weak facets in Taylor Fork (video), and he and Doug triggered a couple avalanches at Lionhead (details and video). Be extra cautious of wind loaded slopes, and avoid steep slopes if you suspect weak, sugary snow exists on the ground. Today the avalanche danger is MODERATE.

The mountains near Cooke City got 5” of new snow equal to 0.3” of SWE. The snowpack there is 4-6 feet deep with a stronger foundation than the rest of our advisory area. Earlier in the week, 2 feet of heavy snow fell and we had reports of natural and skier triggered avalanches (video, video, details). Today, watch for instabilities in the new snow and on freshly wind-loaded slopes. Avalanches could break 2-3 feet deep below the storm snow that fell early last week. Today the avalanche danger is MODERATE. Be cautious of steep, wind-loaded slopes and carefully assess the stability of the last week’s snow before riding slopes steeper than 30 degrees.

There have been four avalanche fatalities in the mountains of CO and WY this season. You can find reports of these slides here. 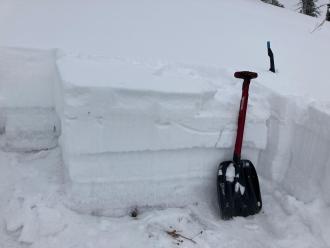 We visited the Throne in the northern Bridgers on 12/26/20. There is a base of 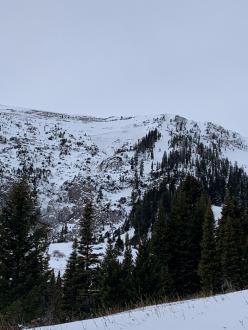 A skier triggered avalanche on the Football Field, out of bounds south of Bridger Bowl 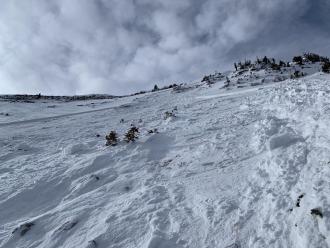 Crown of a skier triggered avalanche on the Football Field, out of bounds south of 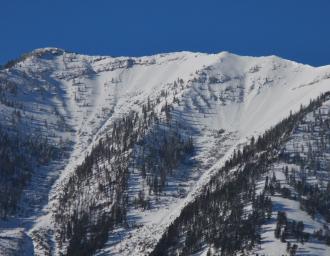 Natural avalanches on Bridger Peak observed at 1200 on 12/24/20. These occurred within the last 24 hours 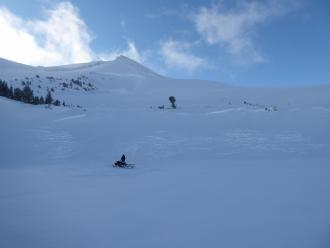