Good Morning. This is Doug Chabot with the Gallatin National Forest Avalanche Forecast on Wednesday, February 12th at 7:00 a.m. Today’s forecast is sponsored by Grizzly Outfitters and Spark R&D. This forecast does not apply to operating ski areas.

Last night 5” fell from the Bridger Range to Hyalite and Big Sky (with 10” at Bavaria). The southern mountains and West Yellowstone got 3-4” and Cooke City received 6”. Temperatures are in the low teens to single digits and wind has decreased from gusts of 50 mph yesterday to an average of 10-25 mph from the west to north today. Another inch may fall this morning, then skies will turn mostly cloudy and clear tomorrow.

Three to five feet of snow has fallen in the last week and last night’s 5” of snow (.5” snow water equivalent, SWE) will keep the avalanche danger elevated around Bozeman and Big Sky. Wind has subsided overnight, but wind-loaded slopes from yesterday are ripe to slide. Yesterday, another large avalanche occurred on Saddle Peak (photos), the second time it slid since last Thursday. We also got reports of cracking and collapsing and a small slide in Deer Creek (details), and Little Ellis . Both of these areas are thin and low elevation, yet reveal an unstable snow structure that can be found higher up. I toured along Mount Ellis ridge yesterday and a party behind us got collapsing and cracking on a corniced slope (photo). We also had poor stability scores in one of our 2 pits when sugary snow near the ground broke (video). We did not ski open slopes and descended the ridge to be safe.

Big avalanches in the last 24 hours, wind-loading and tons (literally) of new snow should give you pause. Notch it back, stick to low-angled slopes and be patient as the snow adjusts. For today, the avalanche danger is rated CONSIDERABLE.

A special note: The Bridger Range had an extensive avalanche cycle with many, many avalanches releasing. We documented many of them in our Photos page, Avalanche Activity page and also listed on our Weather and Avalanche Log. Alex made 2 great videos on the slide on Saddle Peak and the mile-long crown on Truman Gulch.

The snowpack around West Yellowstone and Cooke City has been handling the snowfall remarkably well. Last night’s 2-3” around West Yellowstone and 6” outside Cooke City (.6” SWE) should not adversely affect the snow stability. Dave and I rode around Lionhead (video) on Sunday and Taylor Fork and Cabin Creek (video) on Monday and did not find significant avalanche activity, either natural or human triggered. After the wallop of snow, slopes did not flinch. Our stability tests are still showing loose, sugary facets at the ground occasionally breaking which point to a possibility of triggering slides. Wind-loading also remains a concern from the last couple days of strong westerly winds. Around Cooke City folks have reported similar concerns with wind-loading and the never-to-be-forgotten weak snow near the ground. Be wary around any slope that’s wind-loaded, and be thoughtful in your assessment before playing in avalanche terrain because triggering slides is still possible. For today, the avalanche danger is rated MODERATE on all slopes.

The Bridger Range had an extensive avalanche cycle with many, many avalanches releasing. We documented many of them in our Photos page, Avalanche Activity page and also listed on our Weather and Avalanche Log. Alex made 2 great videos on the slide on Saddle Peak and the mile-long crown on Truman Gulch. 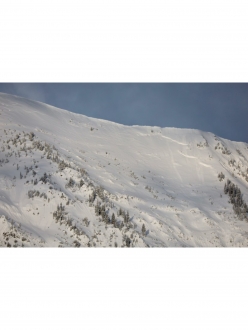 "looks like this likely released from a cornice drop on the football field. Broke across END_OF_DOCUMENT_TOKEN_TO_BE_REPLACED
Collapsing and Cracking on Mt. Ellis 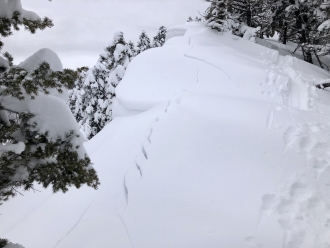