Good Morning. This is Doug Chabot with the Gallatin National Forest Avalanche Forecast on Thursday, January 16th at 7:00 a.m. Today’s forecast is sponsored by Highline Partners and Your Montana Chevy Dealers. This forecast does not apply to operating ski areas.

There’s no new snow to report, only wind. Weather stations are showing S-SW wind blowing 45-65 mph in Hyalite, and gusts of 35-50 mph elsewhere. Today will remain windy under mostly cloudy skies with temperatures rising from the teens to low 20s. Two to three inches of snow will fall around West Yellowstone tonight with a trace in other ranges.

Yesterday, a large avalanche was triggered south of Saddle Peak in the Bridger Range, and a big slide was seen near Cooke City on Mt. Fox. Snowfall and strong wind this past week loaded many slopes to their breaking point. Wind is still moving snow, but overall most slopes are handling the load. Here’s a recap:

Bridger Range: A skier triggered a large slide to the south of Saddle Peak yesterday. Luckily no one was caught because it would have been unsurviveable. If you are wondering what the stability on Saddle Peak is looking like, look no further. This avalanche is evidence of a poor structure that’s been overloaded with windblown snow (photos and description).

Northern Madison Range: Yesterday, skiers triggered a wind slab in Bear Basin and also saw a large slide that released a day or two prior. (photos and description).

Cooke City: A natural avalanche on Mt. Fox broke at the ground on Tuesday. It was impressively large and ran hundreds of feet wide. Although we are finding that most slopes have gotten stronger (video), this lone beast recalibrates the potential danger (photo and description).

In the last 4 days we’ve had field days to Fairy Lake, Lionhead, Buck Ridge and Cooke City. Watch our videos if you are heading out since they show you what to look for. Also check out the recent avalanche activity page which documents smaller slides around Cooke City and whumphing in the southern Gallatin Range.

For today, triggering avalanches is possible and the danger is rated MODERATE. Some avalanches might be small, localized wind slabs, while others could be hair-raising deep slabs. It is not easy to determine which is which, so I recommend notching things back and thinking twice before getting into avalanche terrain.

It might not have snowed, but at least it’s windy. Yes, that’s a joke. The Hyalite weather station is getting buffeted with 65 mph gusts from the southwest. Any loose flakes of snow are long gone and I expect wind-drifts to be packed into hard slabs. The snowpack is generally stable in the northern Gallatin Range with the exception of wind-drifted slopes at the ridgelines and in gullies. Most drifts will be glued down, but some may avalanche. Shooting cracks are a red flag you are on a slope with the latter. Alex’s video from his ski up Blackmore this weekend speaks to this concern. For today, the danger is MODERATE on all slopes with wind-drifted snow and LOW on all others.

Yesterday, a large avalanche was triggered south of Saddle Peak in the Bridger Range, and a big slide was seen near Cooke City on Mt. Fox. Snowfall and strong wind this past week loaded many slopes to their breaking point. Winds are still moving snow, but overall most slopes are handling the load. However, triggering avalanches remains possible. Some avalanches might be small, localized wind slabs, while others could be hair-raising deep slabs. It is not easy to determine which is which, so I recommend notching things back and thinking twice before getting into avalanche terrain.

February 1, King and Queen of the Ridge at Bridger Bowl (fundraiser). This is the Friends of the Avalanche Center’s second biggest fundraiser of the year. Come on out and help us raise money by hiking and skiing laps on the ridge. Prizes, camaraderie and a good time is guaranteed. Register with Bridger to hike in the event, and create a pledge page to raise funds with your Ridge laps.

A snowmobiler was killed in an avalanche in Idaho on Wednesday, Jan 15. The Sawtooth Avalanche Center will investigate. Preliminary info is here. 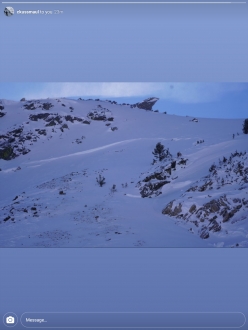 Once in the bottom of Bear Basin, we could see a much 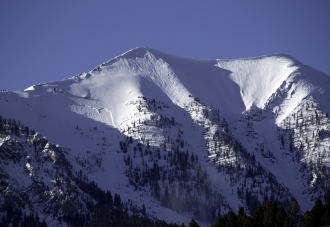 From e-mail: "Skiers triggered two separate slides on south Saddle this afternoon. we witnessed the