Good Morning. This is Doug Chabot with the Gallatin National Forest Avalanche Forecast on January 2nd at 7:00 a.m. Today’s forecast is sponsored by Community Food Co-op and Gallatin Valley Snowmobile Assoc. This forecast does not apply to operating ski areas.

Yesterday, two snowmobilers lost their lives in an avalanche near Seeley Lake, NE of Missoula. We are always deeply troubled by avalanche fatalities. Details are still coming, but preliminary news coverage can be found here.

Snow yesterday followed by a strong pulse last night dropped 8” in the Bridger Range, 6” in Hyalite and 13” in Big Sky. In the southern ranges, Cooke City has 6”, Carrot Basin 5” and 2” at Lionhead. Ridgetop winds are from the west and averaging 20-30 mph with gusts of 45 mph and temperatures are in the teens. Scattered showers today and tonight will drop another couple of inches with decreasing wind.

New snow and strong wind are the avalanche story today in the northern mountains. In the last 48 hours 10” fell in Hyalite, 13” in the Bridger Range and 16” around Big Sky. Snow water equivalent (SWE) totaled 1-1.5” with most of it falling yesterday and last night making it the biggest snow storm since October 20th. Strong west wind is loading slopes with dense drifts. Avalanches will break naturally near the ridgelines in wind-drifted snow. If you venture into steep terrain, even on non-wind loaded slopes, you are likely to trigger an avalanche. Slides will occur in the new snow, and in areas like Buck Ridge the snowpack is weak at the ground and avalanches will break deep and wide. Traveling in or underneath avalanche terrain is not a good idea. For today, the avalanche danger is rated HIGH on all wind-loaded terrain and CONSIDERABLE on all other slopes.

The mountains south of Big Sky to West Yellowstone received 10-12” (1” SWE) in the past 48 hours. Strong west wind is drifting snow at the ridgelines which will be susceptible to avalanching. Yesterday, Dave and I went to Bacon Rind and found weak, sugary snow at the ground struggling to support the new snow (video), so we descended our uphill track to be safe. The weight of a skier or rider can trigger an avalanche, even at the bottom or side of a slope. Be vigilant about avoiding steep terrain and flatter runout zones. For today, the avalanche danger is rated CONSIDERABLE on all slopes.

In the last 48 hours the mountains around Cooke City have 12” of new snow measuring .9” SWE, and reportedly higher amounts at upper elevations. Winds have been blowing this new snow around and both natural and human triggered slides are on the menu. Small, natural avalanches were seen yesterday by multiple parties (details). Ian and his partner rode around assessing the conditions and concluded that he does not trust the stability. As he says in his video, “It’s been snowing, blowing, we’ve got weak layers in the snowpack…play it safe, keep it mellow.” Additionally, some slopes have weak, sugary snow at the ground that could be triggered from thinner areas (video). Given the likelihood of triggering avalanches in the new snow as well as the potential for deep slides breaking at the ground, the avalanche danger is rated CONSIDERABLE today. 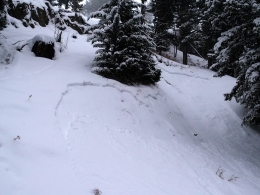 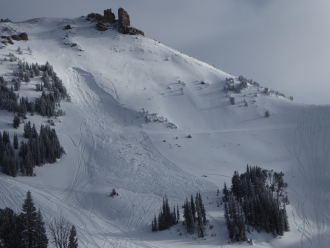 This avalanche below Chimney Rock was triggered on Friday, 27 December, by a snowmobiler. He