Good Morning. This is Doug Chabot with the Gallatin National Forest Avalanche Forecast on Thursday, December 12th at 7:00 a.m. Today’s forecast is sponsored by World Boards and the Yellowstone Club Community Foundation. This forecast does not apply to operating ski areas.

At 6 a.m. there is 1-2” of new snow in the north and 3-4” in the south. West to southwest wind is averaging 15-20 mph and gusting to 40 mph and temperatures are in the high teens to low twenties. Snow will continue this morning with another round tonight. By tomorrow morning the northern mountains will have 3-6” and 6-8” in the south. Today, wind will remain westerly at 20-30 mph and temperatures will rise into the low 20s and drop to the low teens tonight.

On a spectrum of weak snow, the Lionhead area is the worst we have. Dave found half of the 3 foot deep snowpack consisting of loose, sugary snow (facets) that broke easily in stability tests (video). Further north around Bacon Rind and Taylor Fork it is not much better (details).  Surrounding Big Sky the facet layer is not as thick, but it is showing signs of instability. The Yellowstone Club and Big Sky Ski Patrols are getting avalanches to break near the ground on these weak grains, which is relevant because their snowpack is similar to the backcountry.

Ian toured into Beehive Basin yesterday and found the snowpack to be stronger than expected. He saw no signs of instability, but was wary of extrapolating that to the entire northern Madison Range in light of the previous activity on Buck Ridge (photo) and ski areas. Today’s snowfall and wind-loading will stress the snowpack and triggering a slide is likely. Avoiding avalanche terrain is a good strategy since the avalanche danger remains CONSIDERABLE.

The mountains around Cooke City have 4” of new snow and moderate southwest wind. Wind drifts will be thick and easy to trigger today. Avalanches will break at the new and old snow interface, and on a few slopes they may break deeper on a thin layer of facets that Ian and I found on Monday (video, photo). With a snowtorm underway, the likelihood of triggering slides has increased. Visibility is poor so be extra careful about traveling underneath avalanche paths. For today, the avalanche danger is rated CONSIDERABLE on slopes with wind-drifted snow and MODERATE on all others.

Today’s new snow and wind will not help the stability in the Bridger Range. A foot under the snow surface is a layer of weak, faceted snow. Alex found a worrisome snow structure in his snowpit on Saddle Peak on Monday (video). Weak snow was underlying a hard, dense wind slab. Today’s new snow and windy weather will make it possible to trigger slides on fresh wind-drifts and on slopes with the faceted weak layer. For today, the avalanche danger is rated MODERATE.

In the northern Gallatin Range, skiers and ice climbers reported a lot of wind yesterday but not much snow moving. This will not be the case today. New snow last night and today will get blown into gullies and drifted at ridgelines. These fresh wind slabs will be possible to trigger. Cracks shooting out from your boots or skis is a sign to stay off the slope. For today, the avalanche danger is rated MODERATE on wind-loaded slopes and LOW on all others.

On a spectrum of weak snow, the Lionhead area is the worst we have. Further north around Bacon Rind and Taylor Fork it is not much better, and surrounding Big Sky the facet layer is not as thick, but it is showing signs of instability. Today’s snowfall and wind-loading will stress the snowpack and triggering a slide is likely. Avoiding avalanche terrain is a good strategy today.

Sadly, in Colorado a skier was buried and killed in an avalanche on Sunday (Dec 8). This is the first avalanche fatality this season in the U.S. CAIC preliminary report. 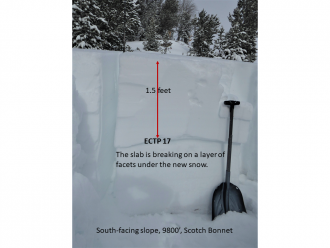 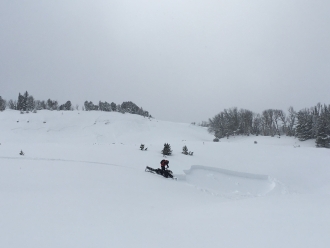