Yesterday morning snow fall quickly ended with no more accumulation and the sun came out. North winds blew 15-20 mph gusting 30-40 mph. This morning temperatures dropped into the single digits F and winds shifted to the W averaging 10-15 mph gusting to 20 mph. Clouds should move over the area today with snow fall starting early this evening. Temperatures should climb into the low to mid teens F and winds will increase some and shift to the SW.  Snow will favor the mountains near Bozeman where 5-7 inches should fall by tomorrow morning. The mountains near Big Sky should get about 5 inches, near West Yellowstone 3-5 inches, and near Cooke City 2-3 inches.

In the Bridger Range, yesterday’s fresh snow was readily transported by downhill winds. These winds formed fresh wind slabs 5-10 inches thick that the Bridger Bowl Ski Patrol was able to easily ski cut. In the backcountry, slopes with these wind slabs will cause avalanches that should break deeper in the snowpack. A good example is a skier triggered avalanche that occurred on Saddle Peak on Wednesday when a skier rode onto a wind drift that broke on deeply buried facets and produced a slide about 60 feet wide, up to 6 feet deep, and running 1200 feet vertical. That avalanche occurred before yesterday’s new snow and wind which will only make matters worse. Weak layers that formed during extreme cold weather in the first week of December combined with new snow and wind make dangerous avalanche conditions. Today human triggered avalanches are likely and the danger is rated CONSIDERABLE.

The mountains south of Bozeman and near Big Sky and West Yellowstone have plenty of weak, faceted snow. In some cases the snowpack is even weaker than it is in the Bridger Range like one slope Doug found above Bear Basin near Big Sky (photo) and a slope on Lionhead near West Yellowstone (video). Without much new snow in these areas to stress the snowpack, getting an avalanche will generally require a slope with wind drifted snow. The snowpack has given us plenty of warning signs. Avalanches have been triggered from a distance (photo) and have fractured over wide areas (photo). Most of these slides occurred on weak faceted snow crystals (aka – sugar snow) found about one foot above the ground. Today the avalanche danger is CONSIDERABLE on wind-loaded slopes and MODERATE on all others.

Near Cooke City plenty of weak snow can be found (video). Weak faceted snow crystals exist one foot above the ground on many slopes, especially ones with about a meter or less of snow. Some slopes have a snowpack over 5 feet deep that is relatively strong. Isolated slopes, sheltered from the wind, have a layer of surface hoar buried about 2 feet deep that can easily make an avalanche. It has been 8 days since the last significant snowfall and triggering an avalanche has gotten harder to do but we’re still travelling as though it’s likely. For this reason and given the variability of the snowpack, the avalanche danger is rated CONSIDERABLE on wind loaded slopes steeper than 35 degrees. All other slopes have a MODERATE danger. 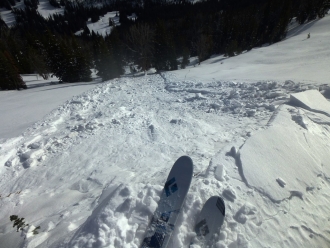 I kicked off a decent sized cornice on the Beehive Bear Basin Ridge.  I was