Warm and windy weather will continue today. Mountain temperatures are in the 20s except around Cooke City and West Yellowstone where they are in the teens. Today, temperatures will rise into the upper twenties to low thirties under mostly sunny skies. Winds have been out of the southwest at 20-30 mph with gusts of 50 mph and will remain unabated. Snow and colder weather is forecast for Wednesday night, so do not despair!

The snowpack differs in depth and layering from range to range, but a common theme threads them all: a poor snowpack structure. Weak snow at or near the ground is failing to support the new snow from last week which now includes stiffer wind slabs. Avalanche activity and signs of instability (cracking, collapsing) have been prolific this last week (lots of photos). Snowpacks less than a meter are the weakest and in many places these areas also have wind-loads. This combination is dangerous. A skier up Hyalite saw 10 natural avalanches that released in the last 72 hours (photo). He also remotely triggered a slide from 500 feet away on a steep rollover near Maid of the Mist (photo). This is a bad sign of dangerous conditions. Furthermore, skiers in the Taylor Fork area of the southern Madison Range experienced lots of cracking and whumphs.

Yesterday, Eric and I rode sleds and dug pits in the Lionhead area near West Yellowstone. When I pinned the throttle and all 1,000 cc’s just dug in the track and barely pushed the sled uphill I knew I had problems beyond my rusty riding. I had found an unsupportable snowpack. Below zero temperatures weakened snow structure as faceted, sugary snow grew in size and lost strength. Lionhead has the weakest snow I’ve seen so far this season (video, snowpits). On some slopes it is capped by a stiff wind slab and would likely avalanche. As Eric and I approached a slope on foot we stopped dead in our tracks when we hit a punchy wind slab. Any sized slab over this garbage would be unstable and we backed away.

When it comes to the snowpack I’m not a trusting soul and neither should you be. Today, human triggered avalanches are likely on wind-loaded slopes and the avalanche danger is rated CONSIDERABLE. Slopes without a wind-load have a MODERATE avalanche danger. Be aware that a Moderate danger is not a green light, especially in these conditions. 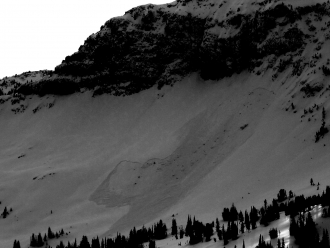 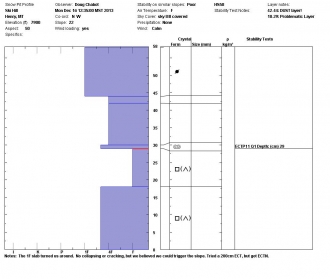