Over the past 24 hours the mountains around Cooke City picked up 1-2 inches of new snow. This morning temperatures are in the mid to upper 20’s F with the exception of Cooke City and West Yellowstone where temperatures are in the low teens F. Today, expect windy and warm conditions under partly to mostly cloudy skies. Temperatures will climb into the 30’s F and winds will crank out of the WSW blowing 20-30 mph with localized gusts in the 50’s. Hyalite weather station in the northern Gallatin Range is currently recording gusts upward of 60 mph. There is a slight chance for mountain snow showers this afternoon, but no major accumulations are expected.

Today, the light is not green for riding in avalanche terrain. The snowpack continues to display obvious signs of instability.

Yesterday, while investigating a human triggered avalanche that occurred on the Throne in the northern Bridgers on Friday (photo, video), a group of snowmobilers triggered a large slide just north of Ross Peak. Second hand information described the slide as being remotely triggered from low on the slope. Fortunately nobody was caught. Remote triggers are a clear indication the snowpack is highly unstable (photo, photo).

These mentioned slides failed on a layer of facets about a foot off the ground. This layer has been the culprit for most of the recent avalanche activity. A second layer of concern is the interface between last week’s storm snow and the weak layer that formed during the severe cold snap earlier in the month. This layer did not yield unstable results in stability tests yesterday, but I still don’t trust it.

At this point in the game all slopes should be considered suspect, especially those that have been recently wind loaded. Fortunately, there is a solution to this stability problem. When stability is the question – terrain is the answer. Making smart terrain selections will be the best way to have a fun and safe day of backcountry skiing/riding. 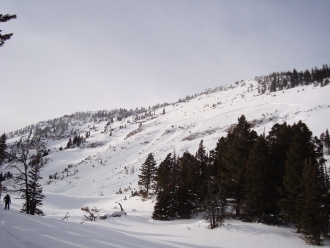 This avalanche occurred in the Bridger Range just north of Ross Peak. The slide was remotely 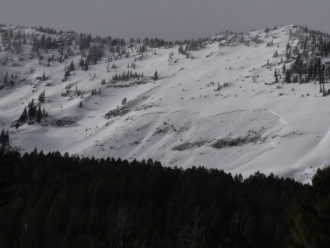 This avalanche was triggered by two snowmobilers riding in the flats below this slope. The 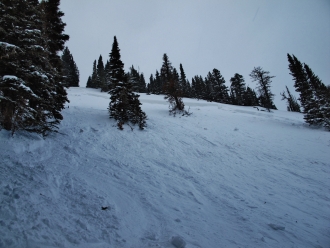 This skier triggerd avalanche occurred on the Throne in the northern Bridgers. The slide broke