Good morning. This is Doug Chabot with the Gallatin National Forest Avalanche Forecast on Thursday, January 19th at 6:45 a.m. This information is sponsored by onX and World Boards. This forecast does not apply to operating ski areas.

An inch of snow fell around Lionhead while other areas remained dry. At 5 a.m. temperatures are near 10F and W-SW wind is blowing 10-15 mph with gusts of 25 mph. Skies will be partly to mostly cloudy and the northern mountains may get a trace to 1” of snow tonight. Temperatures will rise into the mid 20s and wind will be S-SW at 10-20 mph.

Another disaster was averted on Saddle Peak yesterday. A snowboarder triggered a slide right outside Bridger Bowl’s boundary on the Football field on Saddle Peak. The slide ran over the cliffs which would be fatal. The snowboarder shared a video and sent in an observation. The video is worth watching. The slide was 6” deep (estimated) and involved wind-drifted snow that was blown into slabs the night before. A natural slide in Argentina bowl (pic) and skiers triggering small, thin slabs in Hyalite round out yesterday’s activity. The day before on Ross Peak skiers got poor test scores on weak, sugary snow near the ground (observation). They backed off their objective.

In the last 13 days it has snowed 4 days of 2” each; not much. People are starting to stretch their legs and feel confident, which is not unreasonable. Yet avalanche potential exists and we cannot forget this. Besides thinking about your own safety, be aware that people below you are victims of your indescretion. We have weak snow at the ground that is reactive in stability tests and could avalanche. We also have a few wind slabs, most likely found at the ridges. Dig, test, ski one at a time and always think, “What if?” What if I’m wrong? What if someone is below me? What if I can’t see my partner? Have a plan.

For today the avalanche danger is rated MODERATE on all slopes.

Yesterday, a snowmobiler was caught in a small slide on Two Top south of West Yellowstone (details and pics). He was ok. Also yesterday, Dave and I rode into Lionhead and saw a few natural avalanches and one small snowmobiler triggered slide (details and pics). Our main concern is a weak layer of feathery surface hoar and/or a thin layer of sugary, small-grained facets buried 1-2 feet deep. We hunted for this layer and made a video. In one instance a loose snow slide triggered a deeper slab, which is similar to what a skier saw on Woody Ridge outside Cooke City yesterday (pic). Further north the Yellowstone Club Ski Patrol took a picture of a recent natural slab avalanche near Buck Ridge, more evidence that this weak layer has not healed. Ian’s video from Hebgen on traveling in terrain with a buried weak layer and Dave’s video from Beehive Basin where he also found surface hoar are instructive on what to do while riding or skiing in the backcountry. You can either avoid all avalanche terrain or do your homework by digging and testing, looking for unstable snow. Avalanches right now are acting like insurgents, striking when we least expect it.

For today, the avalanche danger is rated MODERATE on all slopes.

Yesterday, a snowmobiler was caught in a small slide on Two Top south of West Yellowstone (details and pics). He was ok. Island Park has a weak layer buried 1-2 feet deep. In some places it is small feathery crystals (surface hoar) and in others it is small sugary grains. In the absence of avalanche activity, shooting cracks and whumpfs, we are left with either avoiding avalanche terrain or digging and testing to see if this layer is present. Check out our field video and read our observations from Arange Peak area yesterday to get a handle on what is happening.

There is an event tonight for the Darren Johnson Avalanche Education Fund. They are generating donations for the next recipients to attend National Avalanche School in October 2024. Tonight is a raffle and pint night at Beehive Basin Brewery (poster). 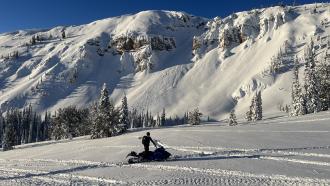 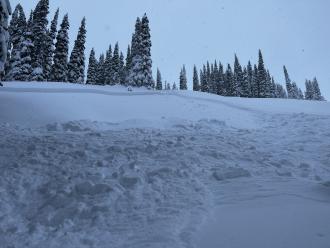 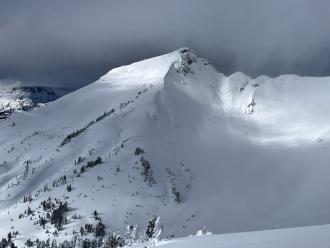