Good morning. This is Alex Marienthal with the Gallatin National Forest Avalanche Forecast on Saturday, January 21st at 7:00 a.m. Today’s forecast is sponsored by Knoff Group Real Estate, Beartooth Powder Guides and Advanced Innovation. This forecast does not apply to operating ski areas.

This morning there is no new snow and temperatures are single digits to teens F. Wind is out of the northwest-west at 5-10 mph with gusts of 15-25 mph. At Bridger and Big Sky wind has been averaging 25 mph with gusts to 38 mph. Today will be mostly sunny with temperatures reaching mid-20s F. Tonight, snowfall could deliver 1-2” by morning with a few more inches expected through Monday morning.

A weak layer of surface hoar buried 1-2 feet deep makes it possible for a person to trigger avalanches in the mountains around Big Sky, West Yellowstone and Cooke City. Both natural and human triggered avalanches broke on this layer earlier this week (Two top details and photo, Lionhead details and photos, Buck Ridge photo, Cooke City photo). This layer is not on every slope, and on slopes where it is buried it isn’t breaking in every stability test which makes assessment tricky (Cooke City video, Lionhead video). You can dig to look for and test this layer, or keep things simple and avoid steep slopes entirely (Hebgen Lake video).

An additional concern is where recent moderate wind has drifted snow into thicker slabs. These drifts alone can be dangerous and avalanche on steep slopes, and could cause an avalanche to break deeper and wider on buried surface hoar. Be extra cautious of wind-loaded slopes. Look for and avoid rounded pillows of snow and slopes below cornices. Avalanches breaking on weak layers near the ground are unlikely, but a person might be able to trigger a slide from a shallower area in the snowpack where these layers are easier to affect. Today avalanches are possible to trigger and danger is MODERATE.

In the Bridger Range and Hyalite moderate to strong wind over the last 24 hours drifted recent snow into shallow slabs that could avalanche under the weight of a person. In the Bridger Range wind is gusting strong at mid-elevations and may be forming drifts well below the ridgelines and in less common areas. Fresh wind slabs will be most hazardous where they could knock you off a cliff, down steep terrain, through rocks, or into trees. Watch for cracks in the snow around your skis or sled as a sign fresh drifts are unstable, and steer clear of round deposits of snow, especially where being caught in an avalanche would have high consequences. Drifts of snow that formed earlier this week are less likely to break, but a couple might remain unstable (Snowboarder triggered slide on Saddle Peak, long running slide in Argentina Bowl).

Although we have not seen avalanches breaking on weak layers near the ground in the mountains around Bozeman, plenty of weak snow exists. On Wednesday, skiers on Ross Peak decided not to ski a steep slope after getting unstable test results breaking near the ground (observation). An unstable slab might rest above weak snow in an isolated area or two. Before fully committing to ski or ride steep slopes, dig down to look for and assess potential weak layers. Today’s strong wind makes avalanches possible and avalanche danger is MODERATE on wind-loaded slopes. Otherwise, the snowpack is generally stable and danger is LOW on all other slopes.

A weak layer of surface hoar buried 1-2 feet deep makes it possible for a person to trigger avalanches. You can dig to look for and test this layer, or keep things simple and avoid steep slopes entirely. Be extra cautious of wind-loaded slopes. Look for and avoid rounded pillows of snow and slopes below cornices. Avalanches breaking on weak layers near the ground are unlikely, but a person might be able to trigger a slide from a shallower area in the snowpack where these layers are easier to affect. 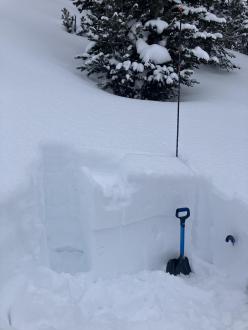 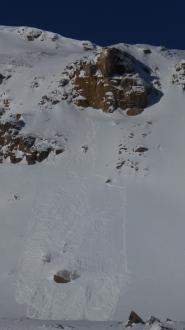 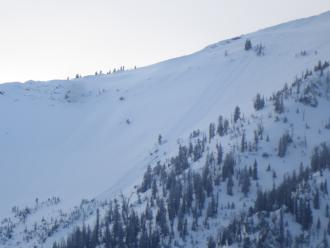 Another slide was seen from the highway in Argentina Bowl. This slide appears to be