Good morning. This is Ian Hoyer with the Gallatin National Forest Avalanche Forecast on Saturday, January 14th at 7:00 a.m. This information is sponsored by Bridger Bowl, Cooke City Motorsports and FUGOWEE Snowmobile Club. This forecast does not apply to operating ski areas.

There are 1-2” of new snow near West Yellowstone while the rest of the area remained dry. Winds are 15-30 mph out of the south and west, with gusts up to 55 mph. Temperatures are in the 20s and 30s F. High temperatures will be in the 20s and 30s around noon, before falling through the afternoon. Moderate-strong south and west winds will continue. Some snow flurries are possible, but shouldn’t lead to significant accumulations.

Strong south and west winds are creating fresh drifts out of the snow that fell this last week. Avalanches could break in the newly drifted snow or on weak layers deeper in the snowpack. Skiers this week triggered a couple of thin wind slabs (details, detail). With increased winds overnight they will be more widespread today. Look out for pillows of drifted snow and steer around them to avoid triggering a slide. Cracks shooting out in front of your skis or sled are clear signs that you’ve found unstable drifts. These drifts will be most dangerous where they’re deepest and where they’re sitting over persistent weak layers.

The most worrisome weak layer is a surface hoar layer buried about a foot deep (tending to be deeper in southern areas and slightly shallower to the north). We’ve found it all over the advisory area, even on wind affected slopes where surface hoar usually gets destroyed before being buried (Buck ridge, Lionhead, Taylor Fork, Cooke City). Last night’s wind may have transported enough snow to tip the scale on this layer and cause avalanches. Dig down to test this layer before riding steep slopes.

There is also still weak snow in the middle of the snowpack and near the ground. You’re most likely to trigger an avalanche on these facets from a thin spot. Identify and avoid likely thin areas and be on high alert if you’re suddenly punching through to the ground (sinking waist deep into facets photo). Stability tests are not going to be very helpful in identifying slopes where these layers are unstable, so simply toning down your terrain choices is the best solution. Make sure you have a partner watching from a safe spot if you’re riding steep slopes. Large avalanches remain possible and the danger is rated MODERATE across the advisory area.

In Island Park, strong south and southwest winds are creating fresh drifts out of the snow that fell this last week and new snow today. Avalanches could break in the newly drifted snow or on weak layers deeper in the snowpack. The most worrisome weak layer is a surface hoar layer buried about a foot deep. Dig down to test this layer before riding steep slopes. Tone down your terrain choices in case you trigger a deeper slide. If heavy snowfall materializes today, instability will rise rapidly. 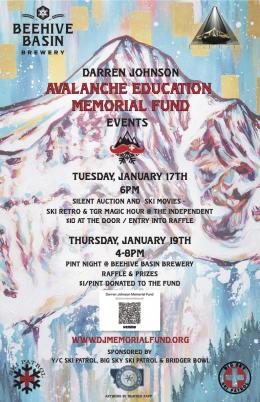 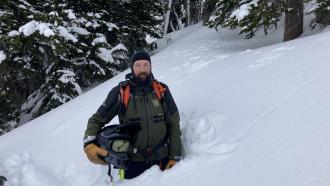 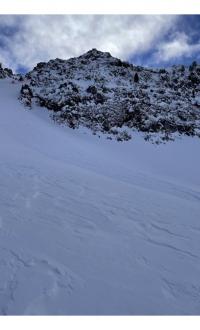 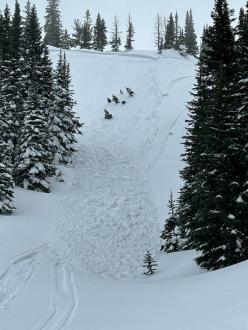