Good morning. This is Dave Zinn with the Gallatin National Forest Avalanche Forecast on Tuesday, March 22nd at 7:00 a.m. This information is sponsored by Gallatin County Sheriff Search and Rescue and Mystery Ranch. This forecast does not apply to operating ski areas.

It is possible to trigger an avalanche on steep slopes across the advisory area today. This weekend 2-10” of snow fell favoring the mountains around Bozeman and Big Sky. Slopes with recent drifts of wind-loaded snow are the most likely place to trigger an avalanche. These could break 1-2’ deep and 100’+ across. While the northern portions of the advisory area got the most snow this weekend, the story is fundamentally the same in the southern ranges.

Temperatures will warm above freezing under clearing skies today. This afternoon, unconsolidated snow in the upper snowpack on south-facing slopes and at lower elevations will get wet, lose strength and become more likely to avalanche. Shift to slopes where the snow surface is cooler and consider the terrain you will need to return through on your way home.

A weak layer of facets is buried 1-3’ deep on many slopes that could allow slides to initiate more deeply and propagate across wider areas. These avalanches are less likely but more dangerous. Skiers in Bear Basin this weekend heard a loud “whumph” when they collapsed these weak layers (details). I investigated a skier-triggered avalanche that broke 18” deep and 500’ wide in Wyoming Bowl on weak faceted snow a week ago (video and details).

Today, evaluate the snowpack and terrain carefully. Be skeptical of stability in recently wind-loaded terrain and on steep south-facing slopes prone to warming in the afternoon. The danger is MODERATE. 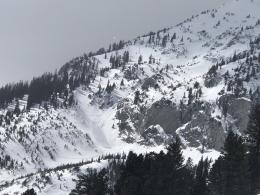 On March 19, two skiers were caught and one was killed in an avalanche near Steamboat Springs, Colorado (preliminary details). This was the fourth avalanche fatality in the U.S. in the past week and the fifteenth this season (https://avalanche.org/avalanche-accidents/). 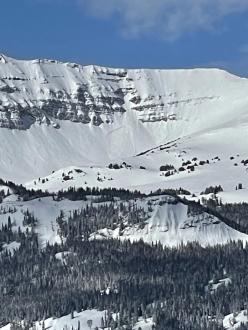 A natural avalanche under the cliffs to the looker's right on Cedar Mountain. It likely 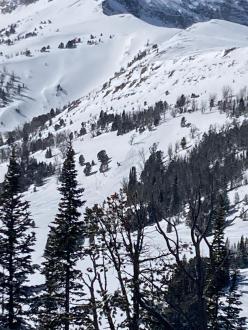 Ski patrollers at the Yellowstone Club spotted this snowmobile-triggered avalanche on 3/21. 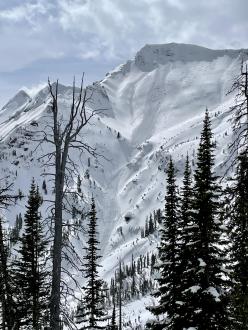