Good morning. This is Ian Hoyer with the Gallatin National Forest Avalanche Forecast issued on Tuesday, March 12th at 7:00 a.m. Today's forecast is sponsored by Stronghold Fabrication and Community Food Co-op. This advisory does not apply to operating ski areas.

High pressure continues this morning with clear skies and no new snow. Temperatures are generally in the teens F. Winds are south and west at 10-25 mph with gusts of 20-35 mph. Today temperatures will reach the high 20s to low 30s F. Winds will be south-southwest at 15-25 mph. Clouds will increase through the day with snow beginning tonight. 1-4” of snow will accumulate by tomorrow morning.

It remains possible to trigger large avalanches near Big Sky. Slides may break on weak layers buried last week (8-16” deep) or on weak snow near the ground. On Saturday, a skier in Bear Basin triggered a slide that broke 3-12 feet deep (details and photos). It initially broke on a weak layer in the upper snowpack and then stepped down to weak snow at the ground. This slide was triggered from a shallow spot near rocks on a steep, windloaded, slope with variable snow depth (photo). Recent avalanche activity is a clear sign that some slopes remain unstable.

Yesterday, skiers in Middle Basin got unstable tests results on the shallowly buried facet layer and decided to back off from their initial objective, sticking to lower angled terrain. This is a great example of searching for signs of instability, and then adjusting plans according.

Stack the deck in your favor by choosing uniform, non-windloaded slopes and digging down to look for and assess the weak layers in the upper snowpack. These weak layers have gained strength, and do not exist on all slopes, but you want to make sure you haven’t stumbled onto a slope where they remain unstable (video, photo).

Triggering an avalanche is possible and the avalanche danger is MODERATE.

Triggering an avalanche has become unlikely in the rest of the advisory area. Doug dug on five different slopes yesterday near Cooke City looking for unstable facets in the upper snowpack (8-16” deep) and didn’t find them (video). On Sunday, I found them near Hebgen Lake, but they weren’t unstable (video). Still, last week avalanches broke on this layer in Hyalite (photo) and near Cooke City (details), so it’s worth quickly checking for this layer before getting onto a steep slope.

While the probability of triggering a slide has decreased, the potential consequences have not. We can’t completely rule out avalanches breaking at the base of the snowpack. On Sunday, skiers in the Absarokas (outside of the advisory area) triggered a deep slab avalanche on a slope with numerous tracks (details, photo).

Yesterday in the Northern Bridgers two separate groups of skiers triggered thin wind slab avalanches (details, photo). These slides only broke 6” deep and didn’t generate much debris, but be mindful in places where a slide knocking you off your feet would have big consequences. Also watch out for small wet loose avalanches on steep sunny slopes as the snow surface heats up.

Avalanches are unlikely and the avalanche danger is LOW today.

Use the Regional Pages under the Forecast tab to get a more detailed look at activity, snowpack and weather in the area you plan to visit.

Check out our Events and Education Calendar for a full list of awareness lectures and field courses. 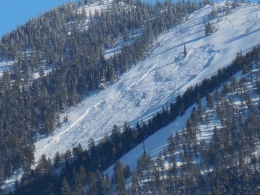 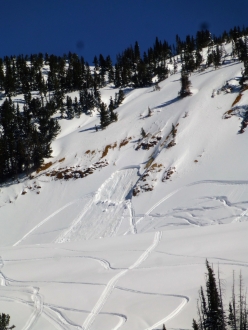 This very small avalanche was triggered by a snowmobiler today (Monday, March 11) on the 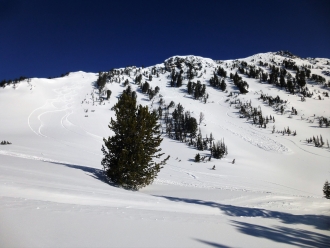 This avalanche was triggered by a snowboarder on Friday (March 8). Small facets under the