Good morning. This is Ian Hoyer with the Gallatin National Forest Avalanche Forecast issued on Tuesday, March 19th at 7:00 a.m. Today's forecast is sponsored by Yellowstone Arctic Yamaha in partnership with the Friends of the Avalanche Center. This forecast does not apply to operating ski areas.

Skies are clear and there is no new snow. Temperatures are in the teens F to mid-twenties and winds are 10-20 mph out of the north and west, with gusts up to 30 mph. Today, skies remain clear and temperatures warm into the mid to upper 30’s F. Winds will stay light to moderate out of the north and west. High pressure continues through the week. The next chance for snow is this weekend.

Avalanches are unlikely today. The combination of warm days and below freezing temperatures at night has been good for stability. The snow surface on sunny slopes has gone through several freeze-thaw cycles. There are crusts on all but the shadiest slopes and thick crusts have developed on the sunniest slopes. On some slopes, refrozen meltwater has locked the upper snowpack up tight, as I found yesterday near Cooke City (video). Small wet loose avalanches could run on these crusts as they break down this afternoon. If you start to see rollerballs and pinwheels, move to less steep, shadier slopes. A small wet loose slide can knock you off your feet or push you over a cliff band. While not widespread, yesterday afternoon near Big Sky skiers found some low elevation slopes where the whole thin snowpack (less than 3 ft deep) was unconsolidated slush. If you’re sinking in wet snow more than a few inches, be wary of gullies where a small slide could you pile up deep debris.

With the warm temperatures, cornices have started to break off. Limit your exposure by minimizing your time travelling beneath them.

The snow surface has stayed dry on high elevation shady slopes. A week out from the last snowfall triggering a dry snow avalanche is unlikely but not impossible. Be on the lookout for isolated drifts where you can still trigger a small wind slab (video). A large slab avalanche was triggered by snowmobilers in the Gravelly Range (outside our advisory area) on Saturday (photo). Keep up good travel practices to minimize the consequences in the unlikely event you trigger one of these slides. Carry rescue gear, ride one at a time, and watch your partners from a safe spot.

With only isolated instabilities, the avalanche danger is rated LOW. 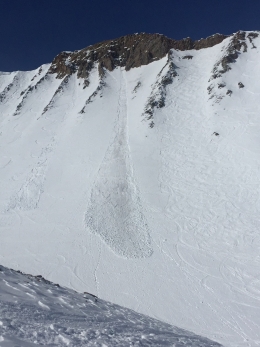 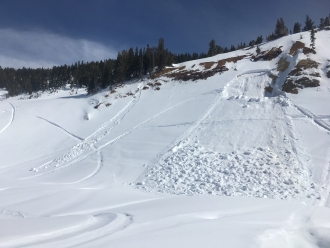 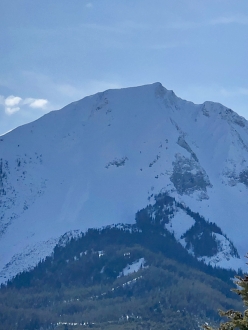 This avalanche ran on Friday (3/15) near Big Sky. It was probably triggered by a 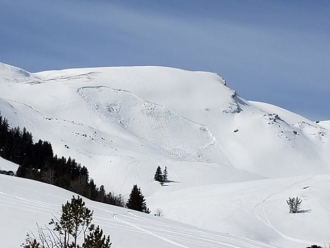 This slide was triggered by a snowmobiler on Saturday (3/16) south of Virginia City. Photo